In this video of a speech I gave at a recent GTD-DC Meetup, I explain how an increase in time demands must lead to an approach that relies on your calendar.

As you may know, this flies in the face of David Allen’s thoughts on the matter in Getting Things Done, first edition (2001). In my talk, I worked my way to this piece of good/bad news in this examination of task management, science and GTD.

Here’s an interesting article I posted in the community for discussion.

It’s written by a woman who bounced between scheduling everything, to not doing so, to re-starting the practice due to the demands on her time.

I don’t think she’s linked to ScheduleU but she could be!

As you may remember, a few weeks ago I invited a number of subscribers to join a Beta Community called “The Busiest One Percent.”

It’s been up and running for around five weeks and I recently extended it for a month or two. The reason?

I am learning so much from the experience about what an effective community would look like that I decided to add more time. Plus there’s more…

I also discovered that the word “Busy” as a name for this community is a problem. It has a whole lot of baggage we bring to it, from bragging about being busy to trying not to be too busy.

So we may need a new name…but not a new focus. Here’s why.

There are a group of very hard-working people in the world who are not being served. Yes, they are busy, but it’s because they:

I suspect that you may belong to this group, which is why what’s happening now is so cool and so different.

The Beta community I set up is sharpening its focus to serve professionals in this group, who I have been calling Ultra-Busys. They could also be called:

Or maybe they are just ordinary people engaged in MegaTasking, SuperTasking or UltraTasking…in spurts. (As you can see, I am still playing with the exact wording which is why I need your help.)

If this community interests you at all, jump in and help me define what it is, what it’s called and who it serves. You’ll be serving this entire cohort, but also yourself at the same time.

You see, the clearer you are about who YOU are in terms of task management, the smarter choices you’ll be able to make. Plus, the improvements you decide to implement now and in the future will be surgical and precise, saving time and effort.

Come join in the fun.

There’s another auto-scheduler on the block plus a few that are being publicly promised by developers. Undoubtedly, there are others being created in garages across the world, and in industrial labs, but here is a quick report on the ones we know.

Butleroy is the latest entry and in the near future, we’ll be going over their spec sheet and sharing the results here on the blog. Here is their listing on ProductHunt.

Other apps such as Amazing Marvin and MineTime promise to bring this feature to market in the near future.

If you are a fan or follower of ScheduleU you may have detected a pivot here at 2Time Labs in the past few months. Now, we have clarified our audience and named it: The Busiest One Percent. Who are these people?

They are a tiny group of professionals who routinely create more demands on their time in a week than the 168 hours each of us gets. This comprises sleeping, working, playing, in relationships, exercising, eating, etc. They are the kind of people who come to ScheduleU for help in becoming Total Task Schedulers.

As a result, they are a bit different from their friends.

The oddity comes from the fact that they have a lot of energy which they pour into their interests without abandon. Others around them are exhausted by their pace. But it’s not a mania or psychological fault that serves as the driving force. Instead, it’s a deep commitment to make a difference in some way. Some want to save the world. Others want to win a gold medal. Many want to get rich as fast as possible.

The fact is, they are a driven bunch and no longer benefit from traditional productivity advice. They have already “been there and done that” with most gurus and their ideas which are really meant for beginners. Instead, they need more advanced assistance that goes beyond the basics and can take them to the next level.

They also want to know that there’s some Gladwell-level research behind these ideas, not just anecdata.

Up until now, these folks have been isolated. I have run into them on Reddit, various chat forums, StackExchange, ProductHunt, Quora and other places but they don’t have a community. That is…until now.

A few months ago I surveyed graduates of A Course in Scheduling here at ScheduleU and picked up on a the gap – the respondents want to be with each other.

So here we here… about to enlist the first group of Beta PlayTesters to The Busiest One Percent Community. If this resonates with you at all, consider joining us here. The action starts this week.

Recently, I published a couple of new podcast episodes to compare the 6 most popular auto-schedulers.

The series actually consist of long conversations with Dr. Melanie Wilson, who introduced me to the first auto-scheduler back in January 2015. This introduction had a profound impact on my professional life, leading me to give birth to ScheduleU.

In this discussion, we come up with the best criteria to judge the quality of an auto-scheduler, then we applied them to each of the 6 apps which currently dominate the market: TimeHero, SkedPal, Sorted3, Focuster, Futurenda and Flux-Speed Schedules. This is the first comparison I have ever seen so we were a bit nervous treading into uncharted waters. Although both of us are longtime SkedPal users, we tried to be as unbiased as possible, hoping to apply criteria that would be enduring.

At the end, I summarized our findings in the form of an interactive Decision Tree Tool along with a Comparison Table.

Here is the first episode of two. 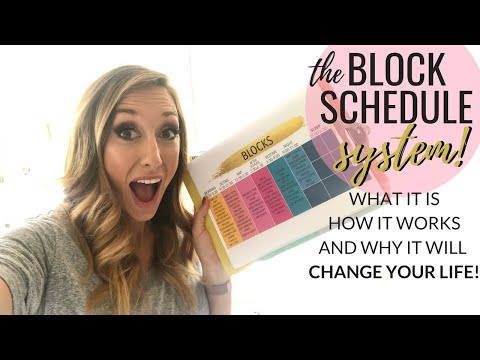 While it’s not altogether new, it emphasizes a decent middle-ground for people who are making the transition to Total Task Scheduling for the first time or looking to refine their manual approach.

Take a look at the video for a definition. She separates the day into blocks, and assigns particular kinds of tasks to each one.

Unfortunately, she’s still using manual methods. She doesn’t seem to be aware of programs like SkedPal which would fit in well with her system, while helping her make sure that she never overruns each block with too many task. In SkedPal, for example, a block is simply the same as a user’s Time Map.

Using the app would help prevent the assignment of too many tasks to a given bucket, while suggesting the best task to work on at any moment in time. These are critical features for the Ultra-Busy person to have.

In the past few days, a new auto-scheduler has entered the market on the iOS platform. It’s the newest version of Sorted, version 3.

Here’s a brief video by Francesco at the Keep Productive vlog on the app.

There’s an interesting article I just added to the social proof page with links to articles, videos and podcasts on the topic of time blocking, and scheduling everything.

It’s entitled: How following a schedule improved my creativity.

According to the FastCompany author Srinivas Rao,

In my experience interviewing 700 experts for my podcast, the Unmistakable Creative, I discovered a clear pattern among every single person who does creative work for a living. From entrepreneurs and graffiti artists to peak performance psychologists, high performers create on a schedule.

Some argue that a schedule is constraining but there’s other research cited at FastCompany which shows that constraints can spark creativity. It’s a similar argument made by those who insist that creativity is a function of professionalism. That is, people who treat their performance achievement like a job they show up to every day are said to produce better results, just because they follow a regular discipline.

In other words, they don’t create when they are “in the mood.” They do so when it’s penciled in their calendar.

Just in case you haven’t noticed, I just launched a new Apps page which lists all the software available for Total Task Schedulers. I list both auto-schedulers and manual calendars suitable for the goal of scheduling everything.
So far, it’s the first/only list I’m aware of and I plan to update it regularly.
Check it out here.

We use cookies on our website to give you the most relevant experience by remembering your preferences and repeat visits. By clicking “Accept All”, you consent to the use of ALL the cookies. However, you may visit "Cookie Settings" to provide a controlled consent.
Cookie SettingsAccept All
Manage consent

This website uses cookies to improve your experience while you navigate through the website. Out of these, the cookies that are categorized as necessary are stored on your browser as they are essential for the working of basic functionalities of the website. We also use third-party cookies that help us analyze and understand how you use this website. These cookies will be stored in your browser only with your consent. You also have the option to opt-out of these cookies. But opting out of some of these cookies may affect your browsing experience.
Necessary Always Enabled
Necessary cookies are absolutely essential for the website to function properly. This category only includes cookies that ensures basic functionalities and security features of the website. These cookies do not store any personal information.
Non-necessary
Any cookies that may not be particularly necessary for the website to function and is used specifically to collect user personal data via analytics, ads, other embedded contents are termed as non-necessary cookies. It is mandatory to procure user consent prior to running these cookies on your website.
SAVE & ACCEPT